The 9/11 Heroes Memorial, located on the grounds of the Municipal Complex, in Warren Township, was designed to commemorate the memory of the Emergency First Responders who perished at the World Trade Center on September 11, 2001.

Warren was among many to participate in the Port Authority of New Jersey and New York program, which allowed Municipal entities to request a piece of the World Trade Center. As a donation to the Township, a local artist, Ralph Garafola, designed the monument, using the thirty-foot long I-beam supported between two solid granite pillars.

Written on the Monument

A granite boulder rests at the foot of the pillars memorializing: 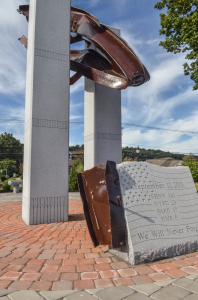